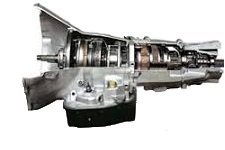 The family of 4-speed automatic transmissions "TorqueFlite" - A518 / A618, has been mainly installed on the rear-wheel drive trucks and vans produced by Dodge and Jeep since 1990. The A518 was modified to 46RH (retainer hydraulic) and later to 46RE (retainer electronic), while A618 was updated to 47RE and 48RE. The A618 transmission is considered to be a heavier-duty modification of A518. The driving torque of the A618 transmission is equal to 610 Nm.

This transmission is a modification of A518. Click on main category to see more related parts

The design of the A518/A618 and 46RH / 46RE / 47RH / 47RE / 48RE transmissions is based on the same principle. All differences and modifications consist in the increased number of gears and addition of the torque converter and the block of solenoids.

Transmissions of this family were used by car manufacturers for three decades thanks to their easy maintenance and resistance to wear. Not complicated assembly of these transmissions simplifies their repair process. Early transmissions of this family rarely require any repair. The problem of spare parts replacement occurs in cars equipped with transmissions, which have solenoids and the valve body. These transmission components get out of order when the car mileage reaches 100 thousand kilometers. Such breakdowns result in expansive repair services, because damaged components should be replaced.

- Direct Drum – exhausts its resource, but more often this component burns out because of a long-time operation with insufficient linear pressure

- The set of solenoids and sensors

Other seals, bushings, springs and bearings fail to function occasionally, due to peculiarities of the driving style and operation.